After seeing a request at GOS, I tried my hand at converting these, as the only other custom consoles available all seem to be real life ones- Nintendo, PlayStation, Xbox etc. So, here are four TS3 Consoles converted to TS2, each available in black, grey and white: 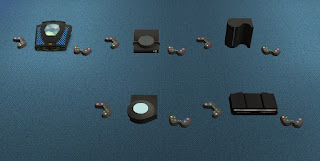 The consoles aren’t recolourable, so the three colours of each one are stand alone objects, meaning there are actually 12 new game consoles here. All consoles use the same black controllers; these override the blue Maxis controller, so I’ve included a black recolour of the Maxis Console to match. (Also, I only just noticed that one of the consoles is sideways in the picture- don't worry, they all face the same way in game.)


Thanks to Srsly Sims, who converted them for TS4- It is easier to convert objects from TS4 than TS3, plus I don’t own ‘High End Loft Stuff’ which two of the consoles are from.


Also, a big thank you to Shastakiss, for finding a fix for the Material Definition (TXMT) to remove the green hue from these! 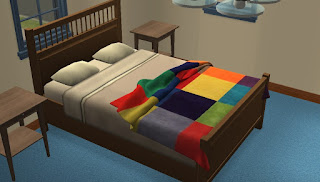 Here are some maxis-matchy recolours of the popular Jonsei Bed Blanket, using textures from:


-TS3 Patterns (Thanks to the wonderful person who extracted them, I can’t remember who you are!)


- Custom beddings by a number of creators including Shastakiss and Chimerical, plus others that I’m sure of- I raided my custom bedding folder!


Swatches of all the patterns/colours: 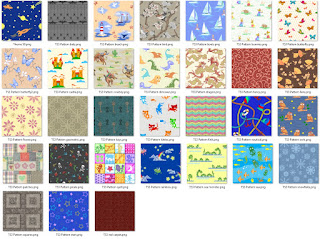 The above swatches are included in the download, so you can easily pick and choose what to keep. I have also included the meshes (double bed and slaved single bed) for convenience.


I’m adding this here as I like to keep all my downloads in one place:)


For Christmas in July I created for ClericalRodent, who had a great list, I had so many ideas of what to make, but I eventually decided on some extracted and converted clutter, 2 lots and, as a bonus, a mod.

The lots are a school: 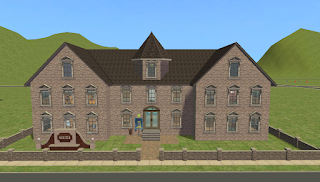 And a set of shops: 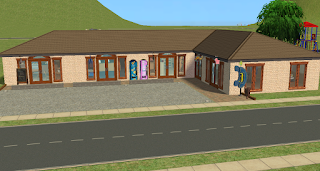 More pictures and lists of included objects can be found in the RAR folder. A few objects refused to package; these are included in the folder marked Objects for Lots. Some of the clutter below is used in the lots. The School is a 3x3 lot and the shops are on a 3x2 lot. Both are community lots made with all Eps and Sps.

The clutter includes food, grocery and bathroom items extracted from TS2. Some are recolours of the same meshes. These are found in Deco -> Misc.: 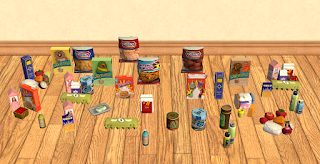 Several Nintendo items for your gamers, which are extracted meshes from the 3DS system which I found online. These are also found in Deco -> Misc.: 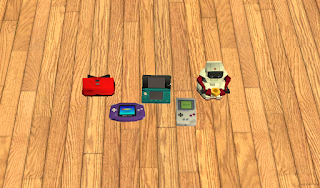 And 16 fossils, bones and a dinosaur extracted from TS4. The fossils are 4 different meshes, each with four textures. These are found in Deco -> Misc. as well: 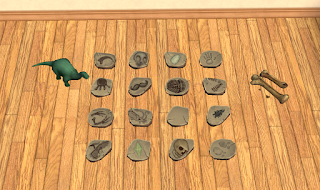 NOTE: I have been unable to get into the SimPe website to get GUIDs, so all the objects in this post have randomly generated GUIDs. They do not seem to be conflicting with anything in my game, however if you have any issues, just try changing the GUID (however doing so will break any recolours, so these will have to be remade). If you need any help with this, just message me.

And lastly, the bonus mod I mentioned. I used Mod Ur Dig by HugeLunatic (Found Here: http://modthesims.info/d/531434 ) and made it so your sims can dig up the Dinosaur Fossils, as well as several other Fossils, Bones and Skeletons I had in my game. These are: TS3 dinosaur footprint by me, small dinosaur skeleton by Amovitam, and a dragon tooth, random bone, bone chew toy, and two animal skeletons from TSM, converted by VampireKiss6661 at the Plumb bob keep. I have included these in the folder with the Mod Ur Dig file for convenience. I also made it so your sims will not ever hit those annoying water pipes when they dig!

I have two little offerings for the Makin’ Magic theme on GOS this month. I would have had more, but I’m going away, and February will be nearly over when I get back. 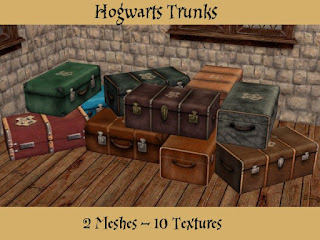 These are converted from the Harry Potter and the Prisoner of Azkaban PC game. There are two meshes, one with one texture and one with nine textures… that’s just how they were, and they’re each mapped differently too! Found in Deco -> Misc.

Second, Uniforms for Miss Cackle’s Academy, from The Worst Witch books and TV series. The original TV series ran from 1998 to 2001, and a remake/reboot has just started airing, so I was inspired to make these. There is also a bonus Miss Hardbroom outfit! 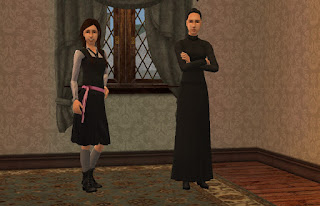 The Cackle’s uniforms are for CF and TF, TF is pictured. The uniforms consist of a separate top and skirt. The top is a maxis mesh (possibly basegame?) and the skirt is a new mesh consisting on Amaryll’s Bell/Tuula skirt with Yuxi’s Ada Boots- but only for TF, the CF skirt has flats, as I haven’t had time to try a boots version.


There is also a cardigan, which I forgot to take a picture of, but it’s black with the same shirt collar and tie. The cardigan uses meshes by Skell and Trapping.  All Meshes are included.

I have also included Miss Hardbroom’s outfit, as seen above. It consists of a top by CatofEvilGenius and a skirt by Trapping. I changed the colour on one of them to match the other, but can’t remember which, so they are both included with their meshes.

Posted by Danielle at Monday, February 13, 2017 No comments: